16 years after the creation of the Memorial of Memory by a team of enthusiasts, the Urban Community of Dunkerque undertook in 2016 as of the end of the filming of the film Dunkirk by Christopher Nolan the expansion of the museum with new name Musée-Dunkerque-1940 Operation Dynamo. An expansion which allowed a doubling of its surface using the entirety of Bastion 32. 17 years after its 1st inauguration on June 1, 2000, the museum is reopened since July 17, 2017.

Housed in the authentic bastions of command of Operation Dynamo, the different collections of weapons, uniforms and models, maps of military operations, photographs and other objects of time take in fact today a new dimension.

The scenography and the "pedago-ludique" approach have been rethought to boost inter-generational relations.

To make this museum a true memorial and didactic pole, two phases of work have been defined in consultation with the volunteers of the association "Memorial of Remembrance" which manages the museum:

A first renovation, completed in early summer of 2017, allowed to extend the surface of the equipment (doubling of the exhibition area: from 750 m2 to 1 500 m2) to improve comfort and welcome visitors. These new spaces thus guarantee the public a permanent exhibition renewed and more valued.

The second phase, scheduled for 2018, aims to structure the working and living spaces of the Memorial Memorial Association. A reception area / shop. 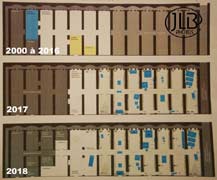 INAUGURATION OF THE SABLIER AND THE MUSEUM

In the presence of Patrice Vergriete mayor and president of the CUD (Urban Community of Dunkerque), Eric Etienne sub-prefect, military and civilian authorities, Severine Hubard author of the hourglass, Lucien Dayan president of the museum and volunteers of the museum, the inauguration took place on 12 July 2017.

The hourglass, a geometric form that could be derived from the unique mathematical formula of time flowing from Ludwig Boltzmann.

The artist Séverine Hubard explains her creative approach and testifies: "My proposition borrows the form of the hourglass, a measure of the time which elapses by analogy with the evacuation of the soldiers caught in the Dunkirk pocket. The center of the work leaves only one person at a time. This work is a tribute to the victims and borrows from the vocabulary of the monument to the dead (the staircase, the base, the pedestal, the pyramid). By a reversed symmetry effect are evoked both the threat of these men caught in a pincer and the sleight of hand that transformed what had the appearance of a defeat, in a first step towards victory. "

This work is not exclusively there to satisfy the tourism of war but also to become a meeting point for the use of the inhabitants. The surroundings are arranged as a walk to bring the passer-by to the foot of the sculpture. An access point wifi in open connection will facilitate the conviviality around the work. Lighted, the work of more than seven meters of height is visible from the dike of day and night. 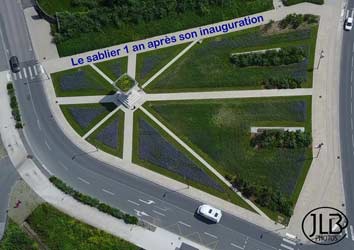 The inauguration of the museum where President Lucien Dayan spoke about the history and contribution of volunteers.

New 2019 for an illustration of the Dunkirk evacuation

Behind the walls, one of the two air conditioning facilities in the showrooms

Exhibition in front of the museum of military vehicles belonnging to Jean-Marie Casteleyn on July 26 and August 23,2020.

The memorial of the memory is opened every day from mid-March to mid-November (10>18h).

Back to home page Operation Dynamo